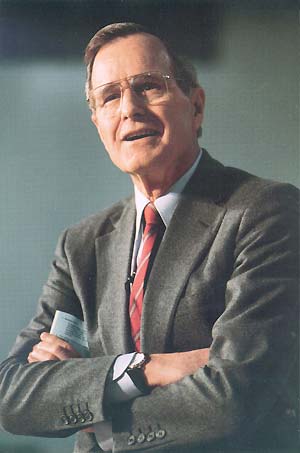 Campaign ’92 came to Edmond in style today as a flag-waving crowd of about 5,000 welcomed President Bush to Oklahoma Christian University of Science and Arts.

A packed Thelma Gaylord Forum exploded with cheers and chants of “Four More Years!” shortly after 9 a.m. today as the president emerged from a second-floor chapel.

“Thanks to all of you who got up at all hours this morning to come to Edmond from Elk City to Enid and towns all over Oklahoma, and a special welcome to all the students here from Oklahoma Christian,” Bush said.

The president shook hands with Edmond Mayor Randel Shadid and other special guests assembled on stage before stepping to the podium at 9:20 a.m. Twenty-one minutes later, he was off the stage and on his way to Louisiana for another campaign stop.

Smiling, the president told Oklahoma Christian students he had only one question:

“Is it too late to audition for ‘Spring Sing?’ ” he asked, referring to the 500-student musical variety show that kicked off a three-night run Thursday night on campus.

Against a backdrop of 53 U.S. flags and a giant blue banner declaring “Oklahoma Christian Welcomes President Bush,” the president was the height of a patriotic atmosphere of the campaign rally.

Bush praised “faith, family and freedom,” bashed what he called the “big-spending Congress,” and promised hope for economic recovery.

In addition, he declared the need for America to expand international trade, criticizing rival candidates who espouse protectionism.

He said those candidates “are not waving the American flag, but the white flag of surrender.”

Other candidates may depict America as a nation in decline, “but if you travel anywhere, you will find the United States remains the undisputed, respected leader of the free world,” he said.

Also, Bush pledged to “keep America strong” and resist efforts to cut military spending any more than he proposed in his State of the Union address.

“Now, the liberals have put down the scalpel and picked up a meat ax, and we’re not going to let it happen.”

The presidential motorcade whisked Bush away from Oklahoma Christian about 10 a.m. The president was to fly to Baton Rouge, La., this morning for another rally, followed by appearances later in the day in Jackson, Miss., and Montgomery, Ala.

Bush arrived in Oklahoma from Memphis, Tenn., late Thursday afternoon as Air Force One landed at Tinker Air Force Base about 4:30 p.m.

Thursday night, he made an unannounced speech at the Myriad to regional Wal-Mart store managers and paid a surprise visit to the historic Cattlemen’s steakhouse in Oklahoma City.

At the rally this morning, Bush was introduced by Oklahoma Sen. Don Nickles, who took the opportunity to jab former Arkansas Gov. Bill Clinton, one of the leading Democratic presidential contenders.

“George Bush didn’t lead marchers against our war efforts or try to evade the draft,” Nickles said, in obvious reference to Clinton. “As a matter of fact, he was a war hero.”

Prior to the president’s arrival, Oklahoma Corporation Commissioner J.C. Watts fired the crowd up remembering the pride America shared during the 1980 Winter Olympics when an underdog U.S. ice hockey team defeated the Soviet Union.

Speaking of Bush, Watts said, “He’s the right man at the right time in America.”

During Bush’s address, security remained tight with police monitors at the top of OC buildings with high-p0wered binoculars.

Bush’s arrival was slightly delayed from his scheduled time to address. The emcee of the day, Larry Stein of Edmond, led the crowd in chants of “Bush-Quayle,” “We want Bush,” and “four more years.”

Stein said later the president was inside “reminiscing” with OC officials for a few minutes.

Stein admonished the “national media to be nice.”

The event was the “who’s who” in Oklahoma Republican politics with most of the party officials on hand including Bill Price, who ran an unsuccessful bid against Democrat David Walters in 1990.

Walters was not present.

After his speech, Bush again received thunderous applause from the crowd. He made his way through a small portion of the audience shaking hands.

Two OC students who had served in Operation Desert Storm met the president and shook his hand.

“It was a firm good handshake,” one of the students said.

(Steve Gust contributed to this report.)