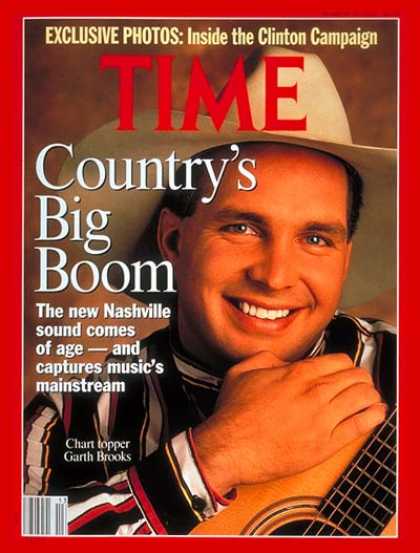 He was wearing a baseball cap, warmup shirt, sweatpants and tennis shoes — customary off-stage attire for the Oklahoma native.

Still, without his trademark black cowboy hat, bright western shirt and boots, it was difficult to tell if it was really him.

Then, he flashed that happy-to-be-an-Okie smile. Hey, that really is Garth!

Later, Brooks would compete with 14,500 screaming, boot-stomping fans to see who could bring the house down first.

With the hometown sensation running, jumping and dancing around stage as he belted out hit after hit and the crowd matching his decibel level with ear-piercing shrieks and applause loud enough to drown out a jet engine, it didn’t take long for the house to fall.

But for now the house was still standing and Brooks seemed more relaxed that way, more subdued than superstar-like as he discussed his future, his family and his fans.

With tickets for his show having disappeared in a matter of hours, the first question for the Yukon schoolboy who made it big in Nashville was obvious: Why didn’t he schedule more than one show for the home folks?

“The same reason we didn’t schedule more than one show anywhere in the nation,” replied Brooks, who stopped in Oklahoma City as part of a six-month, 77-city tour that took him to Amarillo, Texas, Thursday night and Tulsa Saturday night. “This tour has totally taken me by surprise.

“I had warnings from people that were putting this tour together that this might happen. I’m not sure how those seats — 15,000 seats — fill up. I guess I’m still caught off-guard by this stuff.

“Looking back, maybe we should have done two nights, maybe three, in Oklahoma City, but we didn’t. I just got caught off-guard by the demand. It feels good. If it’s there next year, we’ll try to satisfy it if we’re going out out at all.”

Which leads to the next question: will Brooks retire just as he has reached the height of his career?

With the birth of a daughter, Taylor Mayne Pearl Brooks, the former Oklahoma State student is considering cutting short his career in favor of fatherhood and a more traditional home life with wife Sandy.

“Fatherhood’s new for me and it’s kind of thrown me for a loop,” Brooks said. “One thing that I always recall that my parents gave me was time and attention.

“And I think children deserve that. My occupation doesn’t allow me to give time and attention. So I’ve got to find a way, good Lord willing, to do ’em both.

“If I can’t do ’em both, then I must not choose music over (my wife and daughter).”

Brooks has a cutback in his schedule planned after December, at which time he said he will make a decision on his future.

As for the future of his facial hair, he told fans he intends to shave after the release of a Christmas album next week. That is, he joked, unless Sandy lets him keep it.

For now, he is just enjoying his newfound fatherhood.

“Fatherhood, I found out, when you’re mad and frustrated, it’s usually at yourself. It’s just different. … A man told me not long before she was born, ‘Quit sweating it, man. All you have to do is love her.’

“And it was amazing to hold her in my arms. It was pretty much over for ole Dad. She’s a cool gal and I’m doing the best I can.

If Brooks does retire, he indicated he probably will stay in Nashville as a music producer and songwriter, at least for the near future.

He bought property in Edmond earlier this year, but said Yukon will remain his hometown.

“Yukon cannot be replaced for me and never will be,” he said.

But yet, President Bush has an adopted home state. Maybe Brooks could make Edmond his adopted hometown.

Coming home to Oklahoma, Brooks said, remains special, even now that he has become the king of country music and the back-to-back Country Music Association Entertainer of the Year

“Now things are starting to happen all over and it feels good,” he said. “There is one thing different here, thought. The sincerity of the home crowd.

“It’s sometimes not as loud as in California and some nights not as rowdy as in Texas, but there’s a warmth and affection here that you can’t find anywhere else. And I think that is because it’s a bunch of home boys and a home girl playing at home.”

Later at the concert, Brooks concluded his pre-encore performance with an emotional rendition of “The Dance.”

Afterward, he told his fans, “If I never play another day in my life, I’m the luckiest man in the world.”