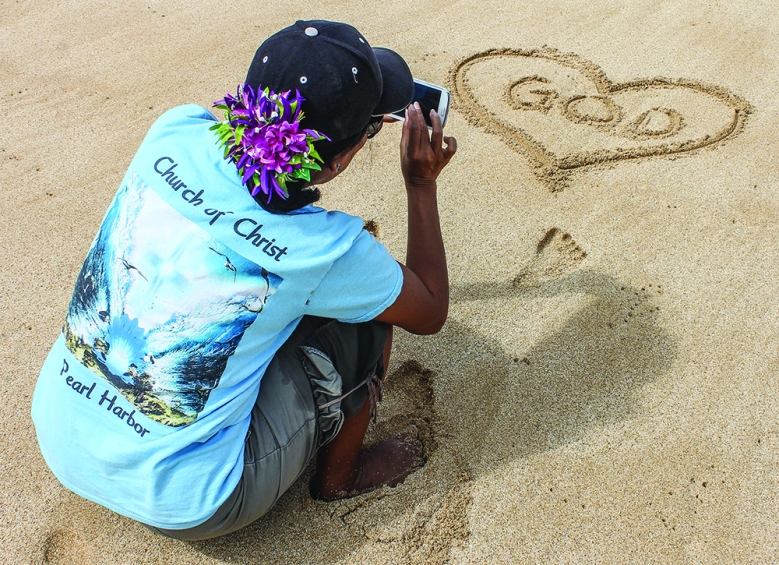 A heart for Hawaii (reporting from Honolulu): Pearl Harbor church has served military families for 59 years, but future at risk.

Mark Young stretches out each syllable of the traditional Hawaiian greeting as 150-plus church members and visitors fill the blue-gray wooden pews in a simple, A-frame auditorium.

“Welcome to the Pearl Harbor Church of Christ, where we keep a little bit of the States and a lot of the Polynesian culture together,” says Young, an Army major sporting shorts, sandals and a flowery shirt.

As the Sunday assembly starts, a fighter jet roars overhead — a reminder of the nearby U.S. Air Force and Navy bases known as Joint Base Pearl Harbor-Hickam.

Over nearly six decades, the Pearl Harbor church has served as the temporary home for an estimated 3,000 military personnel and their families, minister and elder Steve Byrne said.

“I’ve been to congregations from Germany to Italy to all over the place, and there’s no place like this,” said Army Master Sgt. Q.P. Bean, arriving with his wife, Charidy, and infant daughter, Lily.

“When you walk through that door, you’re not a stranger,” the Alabama native added. “People just flock around you. It’s like a king or royalty coming in. It’s overwhelming.”

But Hawaii’s largest Church of Christ must raise $1.3 million to avoid eviction from the Navy property it has leased since 1956, said Byrne and fellow elders John Graham and William Wood.

This story appears in the March 2015 print edition of The Christian Chronicle.