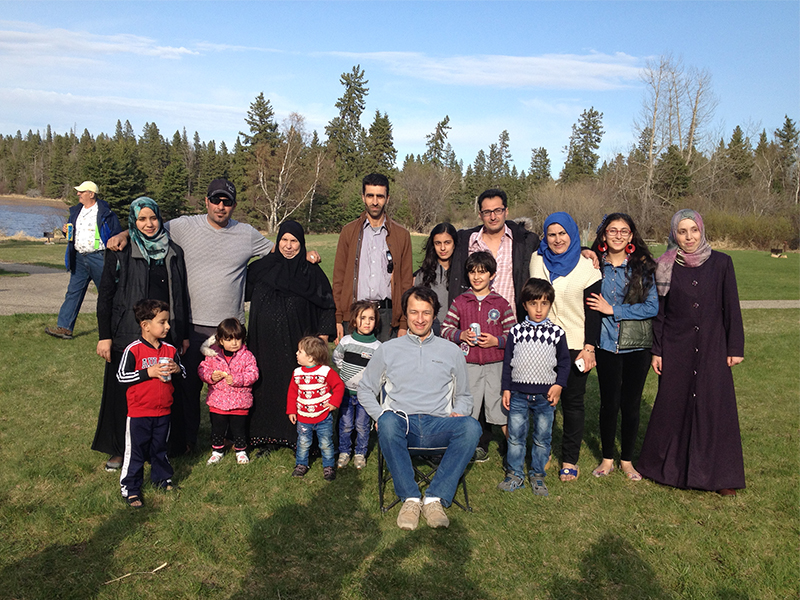 DAUPHIN, Manitoba (RNS) Ken Yakielashek, a Roman Catholic and semiretired farmer in the Canadian Prairies, says he remembers when Christians of varying denominations “wouldn’t talk to one another.”

To Yakielashek, that makes what’s happened in Dauphin — a rural community 200 miles northwest of the provincial capital of Winnipeg — all the more remarkable.

A year and a half ago, three churches put aside theological differences and came together to sponsor the resettlement of three Syrian refugee families to this town of 8,500.

“We have three different theological outlooks on things, but they’ve been pushed to the background,” said Ron Marlin, a lay leader for Dauphin First United Church, a liberal mainline Protestant congregation.

“The focus was very much on helping our neighbors in need,” agreed Cordell Lind, whose wife, the Rev. Lorayln Lind, serves as pastor for the conservative evangelical First Baptist Church of Dauphin.

Read the rest of the story.

Religion News Service is a national wire service whose media partners include The Associated Press, USA Today and the Washington Post.

Thankful every day that I get to be his Papa.
Celebrated Christmas with this guy today, and maybe his mom, dad, aunt, uncle and Nana were here, too. #PapaAndBennett
Merry Christmas 🎁🎄from the Rosses!
Mom and Dad’s house is where a #family photo (taken with your wife and young children after you placed membership at a Nashville-area church in 2002) is still on the refrigerator at #Christmas 🎄 in 2019. #love
Have a holly, jolly #Christmas. It’s the best time (and the last official work day) of the year. #prettychristmassweaters
Always good to catch up with these nerds. #takesonetoknowone
#ThunderUp with the Rosses. (Actually, Thunder down by 21 with 8:54 remaining in the third quarter.)
Got a new #Rangers Rodriguez No. 7 T-shirt, along with a red Gallo No. 13 T-shirt. Both were on sale on Black Friday. Same beautiful wife.
Beauty and the beast. #thanksgiving #prettylady #truelove
Happy Thanksgiving from the Rosses! Thank you, Chellie Ison, for taking our family photo again this year.