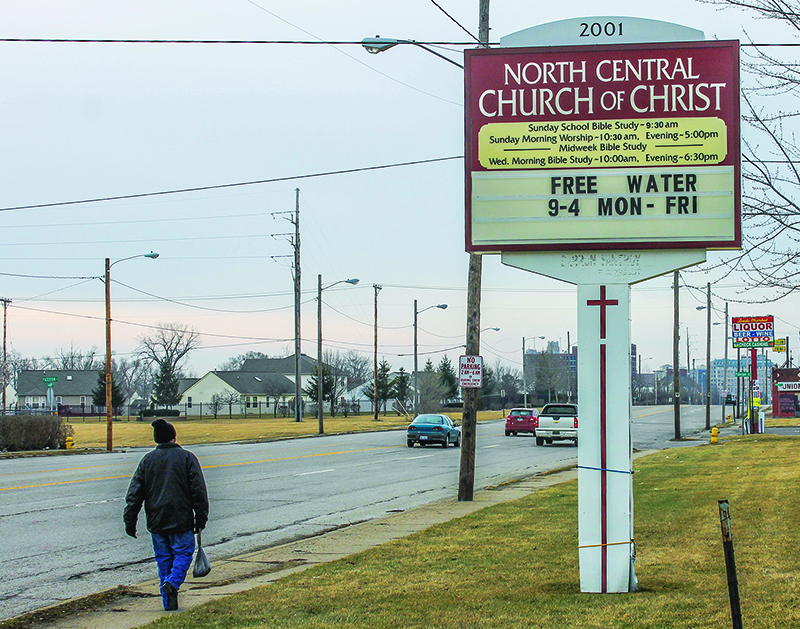 With residents angry and frustrated over lead contamination, Christians work to meet physical and spiritual needs.

The living water of Jesus Christ washes away sins, McDaniel declared as 150 men, women and children bowed their heads.

But people depend on water, too, to quench physical thirst, he said.

Twenty-four-pack cases of water were stacked high inside the church building and its nearby storage facility. Outside, the congregation’s marquee sign invited residents to pick up free water between 9 a.m. and 4 p.m. weekdays.

Since this city 65 miles northwest of Detroit declared a state of emergency in mid-December, the North Central church has distributed between 150,000 and 200,000 bottles of water, organizers said.

Church members Javaris Burks and James Greer, joined by fellow Christians, volunteer all day before going to their regular jobs.

“I always want to hear, ‘Well done, my good and faithful servant,’” said Burks, a team leader at a General Motors truck assembly plant. “We’re in the middle of a community that can really use our help.”

“We just want to make sure we’re reflecting Christ,” added Greer, a lineman for a cable company. “Because sometimes we are the only Bible that people see.”

This story appears in the March 2016 print edition of The Christian Chronicle.