“Take me out to the ball game” is my blog on major-league ballparks and the wonders of witnessing America’s favorite pastime up close.

Back in February, I ranked the 18 major-league ballparks I’ve visited:

I reveal my “starting nine” of favorite #MLB ballparks. No. 1 may surprise you. Or not: http://t.co/PJTfsfUJyv #J7700 pic.twitter.com/hjmsyA5m2r

Based on a 2008 visit, I listed the Kansas City Royals’ Kauffman Stadium near the bottom — at No. 16:

But this past weekend, my son Keaton, daughter Kendall and I returned to Kauffman to watch my beloved Texas Rangers play the defending American League champion Royals.

Both Friday night and Saturday afternoon, we sat up high in nose-bleed seats behind home plate. Still, we had a wonderful view of the action (and got to witness two wins by Texas).

In my return to Kauffman, I was able to recognize what a spectacular ballpark it is: with beautiful fountains flowing beyond the outfield walls, a giant, crown-shaped scoreboard showing video highlights and a wide-open view of the capacity, blue-clad crowds of 38,000. No doubt, the Royals’ recent success has helped the atmosphere.

@bobbyross I’m shocked by the low ranking for Kauffman. Even before the makeover. Hopefully you’ll get to go back someday. Fantastic park.

As it turns out, Brickell was right. I should have ranked Kauffman much higher.

Another fan put it this way:

@bobbyross @cfly i do love kaufman. Ugly outside, very nice, comfortable ballpark inside.

Again, I was wrong.

I’ll definitely be making more trips to Kauffman — hopefully to see more wins by the Rangers.

In the meantime, enjoy these additional pics from K.C.:

Up high and out of breath. #goRangers

See a map of all the major-league stadiums at BallparkChasers.com. 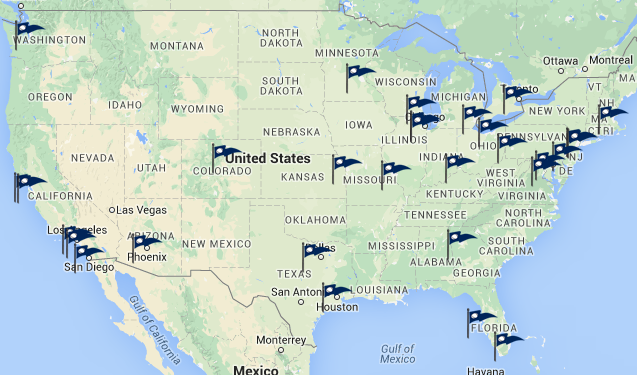