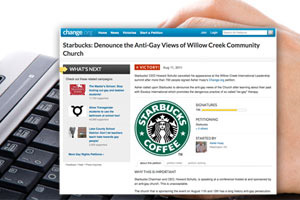 Petitions effective, but not by numbers. Christianity Today October issue.

In August, Starbucks CEO Howard Schultz withdrew from a speaking engagement at the Willow Creek Association’s Global Leadership Summit. The reason: An online petition had called the Illinois megachurch anti-gay and threatened a boycott of the coffee giant.

The petition had only 717 signatures. Senior pastor Bill Hybels said the church is “not anti-anybody” but believes the Bible reserves sexual expression for marriage between one man and one woman.

Around the same time, Apple removed iTunes from the Charity Give Back Group (CGBG), formerly known as the Christian Values Network. The action came after activists collected more than 20,000 signatures complaining that the online hub allows customers to support “anti-gay hate groups” such as the Family Research Council.