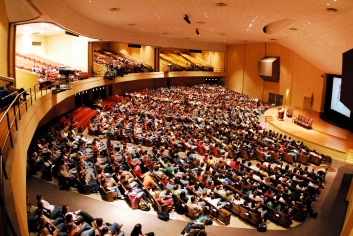 A decade ago, a majority of freshmen at Rochester College in Michigan, York College in Nebraska and Abilene Christian University in Texas claimed membership in Churches of Christ.

That’s no longer the case.

An increasing number of colleges and universities associated with Churches of Christ draw more freshmen from outside the fellowship than within, a survey by The Christian Chronicle found.

Ten years ago, Church of Christ members comprised 70 percent of freshmen at 18 Christian higher education institutions, according to a separate study by Flavil Yeakley, director of the Harding Center for Church Growth in Searcy, Ark.

“I think many of us were surprised at the extent of that decline,” said Mike O’Neal, president of Oklahoma Christian University in Oklahoma City and chairman of the Christian Higher Education Foundation, which commissioned Yeakley’s study.

A time to be born and a time to die. Inside Story.