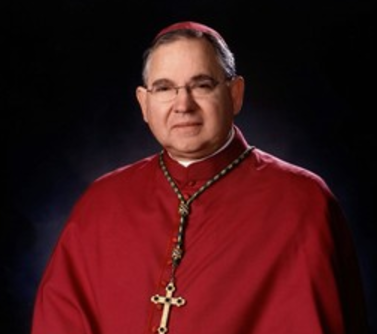 But if the 1,100-mile journey was arduous, it was nothing compared to replacing the first Mexican-American bishop.

“Flores is a legend. There’s no question about it,” said the Rev. David Garcia, rector of San Fernando Cathedral, a church that dates to the 1730s. “When the history is written about the Hispanics and Catholics in this country, Flores’ name will be at the very top. But that does not mean it’s an impossible role to fill for Gomez.”

With his formal installation earlier this month, the 53-year-old Gomez became the nation’s first Hispanic archbishop since Flores’ appointment in 1979. Flores reached the standard retirement age for bishops of 75 last summer and asked to step aside because of health problems. It took the Vatican several months to name his successor.

“Flores opened doors and sometimes broke down doors to allow other Hispanics to move into positions of leadership,” Garcia said. “Very few people seriously question today whether Hispanics can occupy those high positions in business, education, government and the church.”

Flores left San Antonio in 1978 when he was appointed bishop in El Paso. He returned a year later as archbishop.

In Hispanic circles, Flores is “just a giant,” said Catholic scholar Timothy Matovina, director of the University of Notre Dame’s Cushwa Center for the Study of American Catholicism.

“His influence has gone far beyond even just his own diocese,” Matovina added, noting that Flores played a leading role in social causes important to Hispanic Catholics, from standing up for migrant farm workers to founding the National Hispanic Scholarship Fund.

But Flores’ tenure in San Antonio, with about 700,000 Catholics, was sometimes rocky.

His handling of clergy sexual abuse cases drew criticism from some victims’ relatives. Flores apologized for not doing more in the past to protect children against abuse from clerics, but critics said he did not show enough compassion.

Others accused him of a liberal theology that failed to strictly adhere to official liturgy and church doctrine. Gomez, on the other hand, is a member of the conservative Catholic organization Opus Dei, which Pope John Paul II admires. But Gomez said Flores has been faithful to the church and he expects no theological shifts in the archdiocese.

“It’s a great challenge for me because I cannot replace him,” Gomez said. “But I know his style of leadership, so I’ll try to follow his example in that sense, because he’s been so effective.”

Others said, though, that Gomez’s record of serving Hispanic Catholics can stand on its own.

“Archbishop Gomez was very, very involved at the national level even as a priest,” said Alejandro Aguilera-Titus, associate director of the U.S. Council of Catholic Bishops’ Secretariat for Hispanic Affairs.

Before becoming a bishop, Gomez served as president and executive director of the National Association of Hispanic Priests, where he worked to increase Hispanic representation in the priesthood. About 7 percent of the nation’s priests are Hispanic, compared with roughly 35 to 40 percent of parishioners, according to Aguilera-Titus.

Gomez helped establish the Seminary of Our Lady of Guadalupe in Mexico City in 2000. The seminary educates Hispanic seminarians who will serve in the United States.

While in Denver, Gomez led the development of the Centro San Juan Diego for Family and Pastoral Care, which Aguilera-Titus said has become a national model. The center mixes teaching of the Catholic faith with social services and citizenship classes.

“We’ve got hundreds of people coming every day,” Gomez said. “It’s becoming a center of Hispanic culture in Denver.”

A native of Monterrey, Mexico, Gomez worked at San Antonio’s Our Lady of Grace Catholic Church from 1987 to 1999. And his grandparents were married at San Fernando Cathedral.

His admirers include Al and Angela Notzon, longtime Our Lady of Grace parishioners who prayed that he would return to the city as archbishop. They praise not only his spirituality but his administrative and people skills.

“There’s a twinkle in his eye,” Al Notzon said. “You can share a joke with him and he doesn’t mind laughing at himself or others.”

Gomez showed that sense of humor as he recalled how he started attending daily Mass as a high school student in Monterrey. A sign of a future archbishop’s deep commitment to the church? Perhaps. But it was also a good way to get the car keys.

“The only way that my dad let me drive was to go to Mass,” Gomez said with a chuckle.