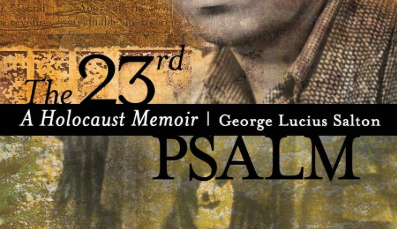 Children of two Holocaust survivors find each other, and find answers

EDITOR’S NOTE – On Thursday, George Lucius Salton, author of “The 23rd Psalm: A Holocaust Memoir,” addresses the 504th Parachute Infantry Regiment, which liberated him from a concentration camp in 1945. His message, at the 82nd Airborne Division Association convention in Reno, Nev., is: “You ended the long night of the Holocaust for me.”

His daughter, Anna Eisen, called him at his home in Palm Beach Gardens, Fla., with a question that sent his mind racing back 60 years to the hell he survived as a teenager.

She wanted to know if her father remembered a man from his native Poland with the last name Waks.

Of course the 76-year-old remembered him. The two had been together in 10 Nazi concentration camps, he said.

For three years, Salton and Waks lived among the dead and dying in barracks and boxcars as their Nazi captors moved them from Poland to France to Germany.

The teens were beaten, starved and forced to wear yellow Stars of David on their shirts to identify them as Jews. They were among a handful of friends who somehow gave each other the will to survive.

Salton and Waks consoled each other and said a tearful Kaddish, a Jewish prayer of mourning, when they learned their mothers and fathers had been sent to the gas chambers.

At one camp, Salton and Waks slept on the same narrow bunk, making do with a single thin blanket.

In May 1945, U.S. soldiers cut down the barbed wire at the Wobbelin concentration camp in Germany, rescuing the Jewish prisoners.

“I had lived with the Angel of Death, and now I stood among the angels of life,” Salton wrote years later.

A few years after his liberation, Salton immigrated to the United States. Waks stayed in Germany.

Both married and raised children who had no grandparents, no aunts, uncles or cousins – because they had been executed.

Salton and Waks set about rebuilding their lives and putting the Holocaust behind them. They lost touch.

While their children were growing up, neither talked much about their holocaust experience. But their despair was impossible to miss.

“Our dad was sad,” said Miriam Grantham, 42, one of four children born to Waks’ second wife. “He cried a lot. He drank. I think he always tried to drown his grief.”

Even with his freedom secure, Waks constantly watched over his shoulder, expecting soldiers who might take him away. He never opened up about the agony he endured.

“He would just cry and mention his family, but he wouldn’t talk about things like that,” Grantham said.

Salton also was determined not to dwell on what had happened. He wanted to protect his three children from the gory details. Besides, he had moved on.

He served in the U.S. Army and met Ruth, his wife of 51 years. He worked many years at the Pentagon and in the aerospace industry as an engineer.

But about five years ago, his daughter, now 45, demanded that her father share the details of his suffering.

“It got to the point in my life where I really had to ask,” said Anna Eisen, who was named after a grandmother she never knew. “I had to say, ‘Dad, you’re so sad. What troubles you? What happened?’ ”

That led to the writing of Salton’s autobiography, “The 23rd Psalm: A Holocaust Memoir,” published by the University of Wisconsin Press in 2002.

Like many survivors, Salton had felt that the Jewish work camps and ghettos contained no memories to honor. But telling his story changed his perspective and brought healing, he said.

Even before the book was printed, Eisen and Margaret Walsh, the book’s editor, made a surprising discovery: Walsh’s late father was among a handful of young American soldiers who liberated the Wobbelin camp.

Eisen and Salton traveled to Wisconsin, where they met William Walsh’s survivors. Walsh had cut down the Nazi flag at the camp where Salton was rescued, and the ex-prisoner got to see it.

The experience was emotional, Margaret Walsh said. “It was kind of amazing because it kind of brought my dad back.”

The woman on the other end wanted information about a synagogue under construction not far from Eisen’s home. Eisen is membership chairwoman of Congregation Beth Israel.

As the conversation continued, Eisen asked politely where the caller was from.

“Germany,” replied the woman, Miriam Grantham, who came to the United States after marrying a U.S. soldier. “My mother lives in Germany and my father was from Poland.”

That’s where her own father was from, Eisen said, and the two women quickly learned that both fathers had been held in Nazi concentration camps.

“Well, what was your family name?” Eisen said.

George Salton recognized the face immediately when his daughter showed him a black-and-white photograph of Grantham’s dad, who had died in 1991.

When Eisen called Grantham back, both sobbed. They had lived minutes apart for years – Grantham in the nearby community of Hurst – yet never connected.

Grantham read Salton’s book and gained a new understanding of her father and “what he really endured.”

Eisen and Grantham met, and their sons – Aaron Eisen and Troy Grantham, both 12 and about the same age as their grandfathers when the Germans invaded Poland – became friends.

“Our fathers really took care of each other and shared the darkest hours of their lives,” said Eisen. “You grow up differently when you don’t have relatives at holidays and when you have parents who are unsure how to be parents.”

In an e-mail that brought tears to Grantham’s eyes, Salton wrote:

“I am still moved and astonished at our special and rare connection. Never, in all the long and difficult years in the camps, did I dare hope that my friends and I might survive and be blessed with children and grandchildren who would live together in peace and freedom. …

“Your father was one of my closest and dearest friends and I feel blessed to have you and your family in our lives.”

This month, in Texas to attend his grandson’s bar mitzvah, Salton took the opportunity to meet his friend’s daughter. As they talked, he reflected on his sadness that he and Waks never reunited.

“But,” Salton told Grantham, “he’s here because you are here.”

My wife, Tamie, is busy making #covıd19 protective masks for nurses and other healthcare workers. I’m particularly fond of the #Rangers ones.
Social distancing in the Ross backyard. #COVID19
Since we’re all working at home, The Christian Chronicle team is doing Zoom meetings to plan our next issue. Zoom is an app that gives you a reason to take a shower and put on a clean shirt every few days. #editorlife #christianchronicle #covıd19
Bread and the cup on Tamie’s rabbit 🐇 saucers. #communion
Not all superheroes wear capes. Some model washable surgical masks with a filter made by their wife for donation to local hospitals. #covid_19
Looks like Tamie made each of us a batch of cookies. Not sure 🤔 why her batch is so much smaller than the one I just called dibs on. #cookiequarantine #chocolatechip
I got to interview Josh and Ginger Willingham at the Mars Hill Bible School benefit dinner Friday night. Look for a story in The Christian Chronicle soon. #faithinaction #mlb #christianchronicle (Photo by Robin Barrier)
Crosses at a corner near the tornado path in Cookeville, Tenn., pay tribute to the 18 lives lost in Putnam County. #CookevilleStrong
I saw a lot of devastation today but was inspired — as I always am at disaster scenes — by the faith and resiliency of Christians working hard to help their friends and neighbors. #cookevillestrong #christianchronicle #faithbasedFEMA
A tornado is powerful, says Gary Flatt, a Double Springs Church of Christ member whose home was destroyed in Tuesday’s EF-4 twister in Putnam County, Tenn. But what’s really amazing, Flatt tells The Christian Chronicle’s Bobby Ross Jr., is “what a bunch of loving Christians can do when they bond together.” Look for more coverage soon on the massive disaster relief effort by Churches of Christ. #CookevilleStrong