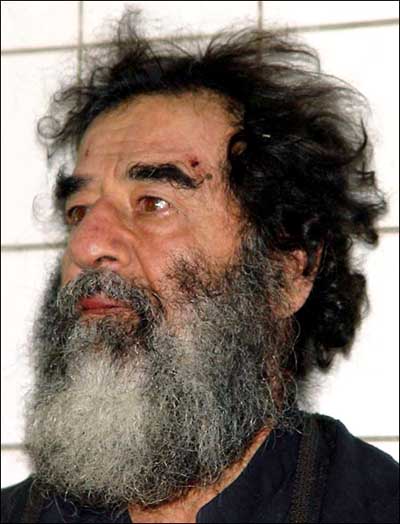 Soldier’s wife: ‘It was just like he had won the lottery’

Usually, when Staff Sgt. Joey Wommack calls his wife from Iraq after a mission, he sounds tired, like he’s about to collapse from exhaustion.

This time, he told her he hadn’t slept in 48 hours, but his voice belied no sign of fatigue.

“It was just like he had won the lottery or something,” Kelly Wommack said Monday in a telephone interview from her Killeen, Texas, home.

“He said it was just surreal,” Kelly Wommack said. “It wasn’t until the day after that it hit him that, ‘Oh, my God, we got him.”‘

Saturday’s raid by 600 troops from the 4th Infantry Division and Special Forces soldiers targeted two farmhouses in Adwar. At a walled compound nearby, Special Forces pulled Saddam – one of the world’s most-wanted fugitives – out of the narrow hole, a hiding place at a safehouse near one of his former palaces in his hometown of Tikrit.

Joey Wommack got a clear view of the bearded, disheveled Saddam through the scope on his rifle, his wife said.

“I was just ecstatic for him,” she said. “I don’t know how you can top your career (after this). He’s on Cloud Nine.

“He was like, ‘We were just doing our job like we usually do.’ All the times they go out on raids, going from house to house for the longest time looking for things. Now, it’s like, ‘OK, we got him!”‘

Kristi Pak, fiancee of Sgt. Daniel Saffeels, is a Baylor University student from Houston. She was sleeping in Sunday, resting up from final exams, when her telephone rang.

“I was really in shock. It didn’t really sink in until I got off the phone.”

Pak said her fiance didn’t share a lot of details about the capture, but she could tell it boosted his morale and that of his fellow soldiers.

“The main reason why they went in the first place is to capture Saddam and to stop his loyalists,” she said. “It gives a purpose to why they’re there. … I can’t believe it actually happened, that he finally got captured.”

Maureen Hickey, wife of Col. James Hickey, commander of the 4th Infantry Division’s 1st Brigade Combat Team, said she asked her husband if he knew it was Saddam when they captured him.

“He said, ‘I really had a strong sense it was him; it wasn’t a body double,”‘ Maureen Hickey said in Monday’s Austin American-Statesman. “He just thinks it happened so fast that Saddam didn’t know what hit him.”

When she learned on television that it was her husband’s unit that had seized one of history’s most brutal dictators, Hickey leaped in excitement from the couch at their Fort Hood home, she said.

“You’re always rooting for the home team,” she said, “so you can’t help but be excited and proud that it’s your guys, the 4th Infantry Division.”

Capture ‘a wonderful shock’ to professors headed to Iraq

As he prepared early Sunday for an educational mission trip to Iraq, retired Air Force Col. William Mitchell, director of Baylor University’s Center for International Studies, turned on the television in his Waco home.

“And it was all over the place,” Mitchell said a few hours later in an interview from Dallas-Fort Worth International Airport.

“It” was news of Saddam Hussein’s capture.

For Mitchell and more than 20 other Baylor professors who left Sunday on a trip to help improve Iraq’s higher education system, the news was “a wonderful shock,” Mitchell said.

“I know that the people we deal with at the universities, based on what we observed last August, will be exuberant,” said Mitchell, referring to a previous trip related to Baylor’s exchange and cooperation agreement with Bohuk University in northern Iraq. “It’ll be a wonderful, wonderful occasion.”

The professors were to travel from Turkey to northern Iraq, where they planned to put on a three-day workshop for Dohuk faculty members later this week to help them begin rebuilding the higher education system in Iraq.

“Almost every faculty member we talked to in August had been affected by Saddam,” Mitchell said. “Either one of their family members had been assassinated, imprisoned or tortured.

” … Something terrible had happened to at least one family member of every person we talked to. So they hated Saddam Hussein.”

Mark Long, director of Baylor’s Middle East Studies Program and author of the just-finished book “Saddam’s War of Words,” heard the news of the capture on the radio on his way to the airport.

“Then we got to the airport and saw the scenes (on television), just extraordinary scenes,” he said.

The celebrations by the people struck Long, but so did the way Saddam was captured.

The Iraqi dictator had said repeatedly during the Gulf War that he would rather die than be humiliated by the enemy, Long said.

“But when it came right down to it, Saddam was found cowering in a small bunker and he was humiliated,” Long said.

Mitchell, who served as base commander at Incirlik Air Base in Turkey and as Air Base Group Commander in Izmir, Turkey, during the Gulf War, said he expected to find U.S. soldiers in ecstatic moods.