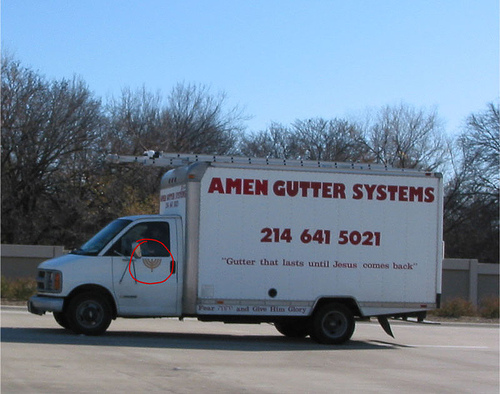 Blessing or blasphemy? Some businesses wear faith on their sleeves

A raspy voice blares from a CD player as Amen Gutter Systems owner Trey Snider and two helpers install rain gutters on a tree-shaded brick home in this Dallas suburb.

The voice isn’t rock star David Lee Roth, Snider’s hero as a hell-raising teenager, but rather a man reading from the King James Version of the Bible.

Bright red letters on the Christian convert’s white truck tout his company’s warranty: “Gutter that lasts until Jesus comes back.”

“I tell people, ‘If you have any gutter problems and you have not seen Jesus return on the clouds with great power and glory, call me,”‘ said Snider, 35, a self-described former drug-dealing fornicator.

From Faith Electric Inc. to Alpha-Omega Plumbing Co., hundreds of businesses across the nation wear their faith on their sleeves – literally.

“I believe Christians would rather patronize other believers out of a charitable, heartfelt desire to bless them,” said Todd Tomasella, publisher of Dallas area “Believer’s Business Directory” yellow pages.

Tomasella’s 200-plus advertisers range from The Living Water car wash to Kingdom Builders real estate. All must sign statements of faith affirming their commitment to Jesus Christ.

But what some call a blessing, others consider blasphemy – or at least bad business.

“I don’t believe … it was ever the intention of Christ to have his followers try to advance themselves economically by reference to their faith,” said L. Kent Gilbreath, a lifelong Baptist who teaches economics at Baylor University.

Gary Adams, pastor of Kelham Baptist Church in Oklahoma City, said he learned the hard way that “the best witness is not a sign but good workmanship and a good product.”

Several years ago, a church Adams pastored in Ohio hired a “Christian” aluminum company to install storm windows on the parsonage, he said.

“The windows did not work,” Adams said. “They would not stay up when summer came.

“Our trustees discussed how to fix that … and someone suggested another Christian workman. One of our men summed up the lesson we’d learned: ‘Let’s find a man who does good work, whether he’s a Christian or not.”‘

On the other hand, Muslims such as Isam Alimam aren’t exactly the target audience for such companies. But the Lewisville, Texas, architect said he takes no offense at the existence of Christian-oriented businesses, as long as they don’t discriminate against non-Christians.

“If somebody wants to declare his faith or belief and wants to do business with people that share that, I don’t really feel bad,” Alimam said. “To the contrary, I may respect the man.”

Steve Mims, an Arlington, Texas, man who has installed garage doors for 20 years, said he gave his business a more spiritual name last year as he faced competition from “Angels Garage Door Service.”

“I asked God, ‘How can I compete with that?”‘ Mims said. “He said, ‘Name your company Heaven Sent Garage Doors, it’s got more power.”‘

Like Mims, Snider counts on God’s intervention to make his gutter company a success. In fact, business was mediocre until a hail storm wreaked havoc on the area in April.

“He cursed somebody else, but he blessed me,” Snider said.

A native Texan, Snider was baptized at age 9 but lived “like a heathen” until his mid-20s, he said. About nine years ago, he had an “overnight conversion” when he realized the emptiness of his life, he said.

“I left work Friday cussing and getting high and all that stuff and I came back a different person,” he said. “I worked with all these gutter guys and they were like waiting for me to go, ‘Just kidding.”‘

To more traditional Christians, Snider still looks the part of a rebel: He sports a ponytail, silver hoop earrings and a Venetian glass bead necklace with a silver menorah, symbolizing his commitment to his faith’s Jewish heritage.

But his transformation was no joke.

In March 2001, he started Amen Gutter Systems, seeing it as a way to fulfill the Great Commission – Jesus Christ’s command to “go and make disciples of all nations.”

“I’ll go wherever God sends me, but this is my way of reaching people in the residential community,” Snider said.

Still, he knows that his outspokenness – on heaven and hell, on his opposition to abortion, on his support for the nation of Israel – turns off many potential customers.

But that’s just fine with him.

“If I am hated by somebody, I want to make sure I’m hated because of Jesus and not because I’m a shyster or because I didn’t do the job right,” he said.